Please vote Rory Palmer as your FIRST preference
in the ballot. 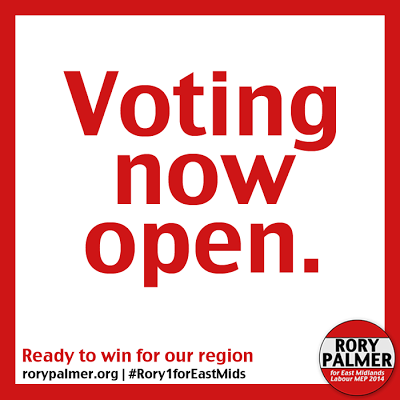 Online voting is now open for the ballot to order Labour's MEP candidates in the East Midlands for next year's European Parliament elections.

Ballot packs will arrive in the post in the next few days.


Tweet your support using #Rory1forEastMids
Posted by Rory Palmer at 22:49 No comments:

Experienced representative in our region

I hold a senior position in local government in the East Midlands.
As Deputy City Mayor of Leicester I have a track record of delivering:
Led the implementation of the Living Wage at Leicester City Council.
Created new apprenticeships as part of plans to tackle youth unemployment.
Set up and chair the Leicester Child Poverty Commission.
Worked to secure investment in the area to create jobs and growth.
Elected as a councillor in 2007 and re-elected in 2011: assisted hundreds of residents on a wide range of issues.
I am experienced at taking up casework and winning results for the people I represent.

I sit on a European level board of city mayors & leaders, working to secure EU funding for local energy projects.
Attended meetings with EU Commissioners, officials and MEPs in Brussels.
Spoken at events and conferences in Europe.
Invited to speak at last year's Labour regional European Forum and at last November's European Socialists youth unemployment conference in Nottingham.

Campaigned on issues including low pay, pensions, employment rights and equalities.
Won the TUC National Young Members Award.
Involved nationally in the campaign to extend the minimum wage to young workers.
My first ever trip to Brussels was to represent young workers in the UK at a European Trade Union Confederation youth conference.

We have to win the doorstep argument on Europe.

We need to connect with people in our communities who are worried about the future.
It is not our job to defend the status quo. The EU is not perfect and if I am an MEP I will argue for real change and reform in Europe: change to make sure Europe works for the East Midlands.

We need to make the pragmatic argument for Europe.

Thousands of jobs in our region, in manufacturing, research & development, distribution and other sectors, depend on Britain's EU membership. The EU is also a platform for Labour to fight to protect and win stronger rights and protection for workers, citizens and consumers.
Youth unemployment is at crisis levels. I support eorts at the European level to get young people back to work: this is one of my top priorities for our region.

Our campaign in 2014 has to be about real issues: unemployment, the economy and living standards.

We cannot ignore UKIP. We need to take on UKIP and make sure it is Labour that sets the agenda in next year's elections. As a parliamentary and council candidate I have taken on and beaten UKIP and the BNP.

As with any campaign, Labour's strongest asset will be our activists. As a candidate I will listen to our members and make sure the European campaign responds to your local concerns. These elections are a crucial milestone towards the 2015 General Election. In my view there can be no 'no-go' areas for Labour in 2014: every street, village, town and city is a battleground in these elections.

I will listen to our members; attending CLP, branch and trade union meetings where invited to discuss the 2014 campaign.

Apathy remains a big challenge in European elections. We have to make these elections relevant and reach out to people who have lost faith in politics. I will lead a campaign to connect with voters in all communities, including young people, students and first time voters.

LASS do very important work in the city and county, including providing rapid HIV testing, support, information services and advocacy for people affected by HIV and AIDS. They are an innovative organisation with extremely dedicated staff and volunteers. I am always impressed with the work LASS does, particularly in challenging stigma and discrimination and in taking their services out into community settings.

The GlaxoSmithKline IMPACT awards are organised in partnership with The Kings's Fund and LASS will now benefit from a £30,000 award. Find out more about LASS and their work here.

The campaign leading up to the MEP candidate ranking ballot is moving on at a pace.

In a couple of weeks Labour Party members across the East Midlands will receive their ballot papers and will be asked to rank Labour's candidates in order of preference. This ballot will determine the order of Labour's candidates on the regional list for next year's European Parliament elections.

It has been good to meet lots of members across the region in the last few weeks. I have attended hustings events in Lincoln, Nottingham and in Bolsover at the Labour East Midlands Local Government Day. It was also good to speak at Bosworth CLP earlier this week and to join members from Derbyshire at a curry night organised by Mid Derbyshire CLP.

On Thursday I was at a fundraising dinner in my home CLP, Leicester South, where he heard from Shadow Chancellor Ed Balls. It was good to see so many friends from across Leicestershire and beyond at this event.

Yesterday I was at the Labour East Midlands Local Government Day in Bolsover. This event was a good opportunity to discuss the challenges facing local government and to hear about the excellent and important work Labour councillors are doing in all parts of the region.

I am looking forward to the hustings events scheduled over the next couple of weeks (details here) and to meeting Labour Party members across the region. Thank you to everyone who has already pledged their support for me in the ballot, and thank you to my campaign team.

I am really pleased to have the formal endorsement of UNISON in my campaign to be elected as a Labour MEP for the East Midlands.

I have worked closely with UNISON members locally on a wide range of issues including the Living Wage, public sector pensions, defending the NHS and fighting the government's public spending cuts which are hitting our public services. UNISON is the biggest public sector union in Britain and in Europe.

I am looking forward to working with UNISON and other trade unions across the East Midlands as we campaign for next year's important European elections.

Email ThisBlogThis!Share to TwitterShare to FacebookShare to Pinterest
Labels: Elections2014

This weekend we had the first hustings events organised by the regional Labour Party as part of the process leading up to the ballot which will decide the order of Labour candidates at next year's European elections.

It was good to be at these events, in Lincoln on Friday and in Nottingham on Saturday.

The East Midlands Labour Party is organising further hustings events across the region for Labour Party members. I hope that members will come along to meet the European candidates, ask questions and put forward your ideas for next year's campaign.

It is important members have their say as we develop the campaign for next year's elections and to ask candidates for our views on the issues that you care about.

Please contact me or the East Midlands Labour Party for further details.

As well as these hustings events I am always happy to attend local CLP, branch or trade union meetings to discuss with members why I am standing and to talk about next year's European elections.
You can contact me here. 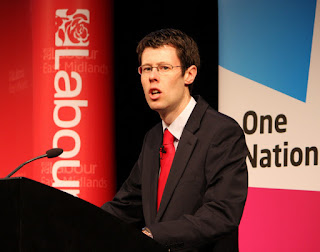 I am pleased to have the support of Leicestershire's youngest County Councillor Heather Worman in my campaign to be elected as an MEP for the East Midlands.

Heather was elected in last week's elections, gaining the Ibstock & Appleby seat from the Tories.

'As a young county councillor we need MEPs that will support and help young people. Rory will fight for young people's needs in Europe. He has already given great support to young people getting involved in politics and will only continue working hard to do so. That is why I would encourage all young members to support him and why he has my full support.'


Tweet your support for Rory: #Rory1forEastMids
Posted by Rory Palmer at 07:00 No comments:

Yesterday I visited the Artisan Cheese Fair at Melton Mowbray.

Just like last year, this was a very enjoyable event, showcasing food producers and their produce from across the country. I am a strong supporter of local, traditional food production.

You can find out here why I am campaigning to maintain the historic connection between Stilton and the East Midlands.

As part of the European election campaign I am looking forward to visiting food producers across the region to discuss the challenges they face and how Labour MEPs can work to support them. 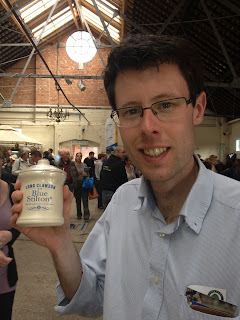 I spent polling day in Retford, Nottinghamshire where Ian Campbell and Pam Skelding gained seats from the Tories and in the marginal seats of Loughborough and North West Leicestershire. We made important progress in both these places, including the election of Leicestershire's youngest county councillor, Heather Worman. I also spent time on polling day campaigning for Amanda Hack in Enderby, South Leicestershire, where Labour came very close to beating the Tory incumbent.

Congratulations to Lincolnshire Labour on their excellent set of results, and also to Northampton Labour where important and impressive progress was made.

We saw strong, well organised campaigns across the region for these elections, showing the very best of East Midlands Labour.

In the final couple of weeks of the campaign I joined our teams in High Peak, Derbyshire; Ashfield; Bassetlaw; Northampton; South Leicestershire; North West Leicestershire and Loughborough. Well done to all our candidates, agents, organisers and campaigners. 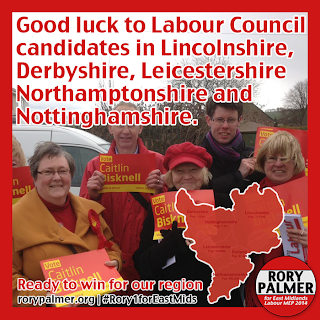 Good luck to Labour's County Council candidates today across the East Midlands and across the country.

I have campaigned across the region, this week I have been in Ashfield, High Peak, Loughborough and Northampton. Our candidates and campaigners have been leading great campaigns - all offering real and positive change for our communities.

If you can help Labour win today contact your nearest Labour Regional Office.
The East Midlands office details are here.
Posted by Rory Palmer at 06:00 No comments:

It was good to be in Swadlincote in South Derbyshire today with Labour's county council candidates and campaigners as Ed Miliband visited to answer questions from the public in the town centre. 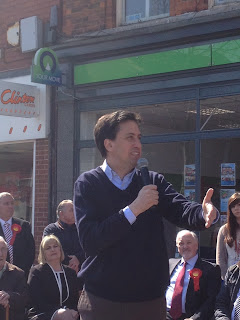 I spent time with our campaign teams in Buxton in the High Peak; in Ashfield, Nottinghamshire and in Loughborough in the final weekend of the county council campaign.

Everywhere I have been across the region we have seen the very best of the Labour Party: determined, well organised campaigns taking a message of real and positive change to their communities.

Good luck to all Labour candidates on Thursday.