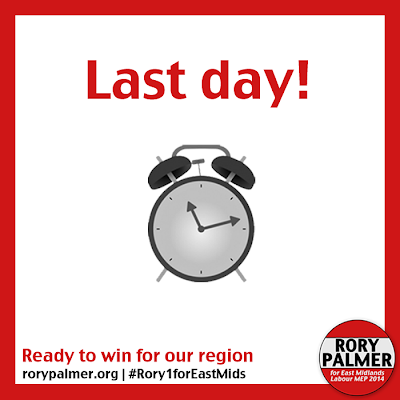 The ballot to decide the order of Labour's candidates for next year's MEP elections closes at 5pm today.

This brings to an end eight weeks of voting and several months of campaigning.

Thank you to my campaign team who have worked tirelessly to engage as many members across the region in this process as possible. We have made thousands of phone calls and mailed thousands of leaflets.

Whatever the result there are two things I can say at this stage:

1. I am incredibly proud of the campaign that we have run. My campaign has made contact with thousands of members across the region.

I wanted to make sure my campaign reached out and engaged members right across the region and involved them in this process. I know we have done that.

I also wanted to involve members in my campaign and that has happened. I am grateful for the efforts of so many volunteers who have given an hour of their time here and there, many week in week out.
This has been a team effort and above all it has been really enjoyable. So, to everyone who has helped and supported my campaign, thank you.

2. All our focus must now move to preparing for the elections next May. These are important elections for our region, for the country and for Labour. It is vital we elect as many Labour MEPs in the East Midlands as possible, to fight for the jobs and investment we need.

I am looking forward to campaigning across our region between now and next May and working hard to elect Labour MEPs to speak up for our region in Europe. 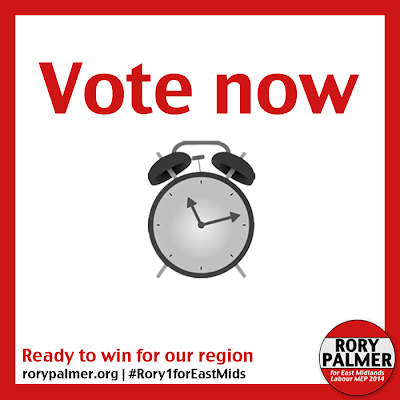 If you are a Labour Party member in the East Midlands and have not yet voted in the MEP candidate ballot, please vote now!

The ballot will close at 5pm on Wednesday.

This ballot will decide the order of Labour's candidates for next year's European Parliament elections.

Party members received ballot packs in the post several weeks ago. If you post it first class today it might arrive in time. Members also received an e-mail advising of online voting.

You can find out more about me and my campaign on this site.

Please consider voting for me as your FIRST preference.

This was a wonderful event, attended by representatives of other faiths, including the Bishop of Leicester.

Thank you to Malik Salim MBE,  Mustafa Malik, the Management Committee of the Mosque and Islamic Centre for a very enjoyable, interesting and enlightening evening. 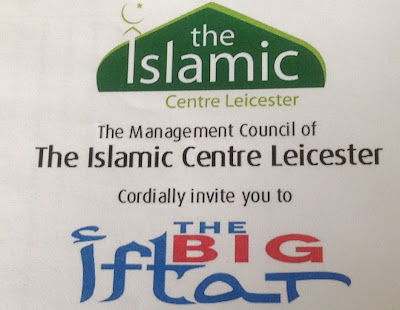 If you have not yet voted in the Labour MEP candidate ballot please vote today!

This ballot is important - it will decide the order of Labour's MEP candidates in the East Midlands for next year's European Parliament elections.

If you post your ballot today it should arrive in time. Online voting is still open if you have received an e-mail from the Labour Party.

You can find out more about me and my campaign on this site.

Thank you to everyone who has already voted in the ballot. 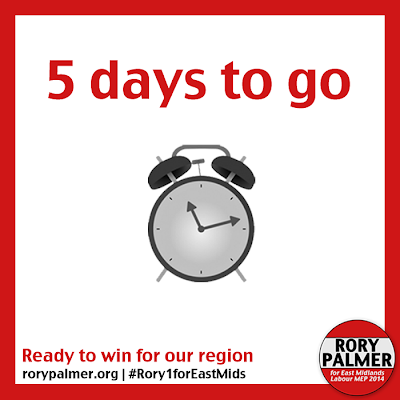 Bold decisions are needed on health


Earlier this week I published a letter in the Leicester Mercury calling on the Government to show more ambition on public health. This follows decisions not to proceed with minimum unit alcohol pricing or plain packaging for cigarettes.

I agree with the Mercury Opinion "Decisions on public health are wrong" (July 23).

The Government's recent decisions not to proceed with minimum unit pricing for alcohol or plain packaging for cigarettes raise serious questions.

Based on these decisions it is clear this Government has no ambition when it comes to public health.

To make significant improvements to public health and to tackle long-term illness and preventable deaths, governments need to be bold and radical.

The big decisions necessary will always be controversial and generate heated debate.

Take, for example, the ban on smoking in public places. This law has had a significant and positive impact on public health.

I remember well the controversy this created at the time, as well as the criticism the then Labour Government faced for proposing this radical and reforming legislation.

In Leicester, we are determined to see public health improve.

The city council, together with its partners, will continue to invest in its successful stop smoking campaigns.

Smoking is the UK's biggest killer and Leicester has a smoking rate higher than the national average.

Our aim is to see Leicester as a smoke-free city by 2035. This is a bold and ambitious target.

Sadly, the Government appears not to share our ambition as moving to plain packaging would have had a major impact on reducing smoking, as shown by evidence from other countries.

In 2010-11, there were more than 6,000 alcohol-related hospital admissions in Leicester. Health partners in the city are determined to address this problem and ensure a good range of services for people affected by alcohol misuse.

Minimum pricing could have played a big role in reducing the misuse of alcohol.

There are significant health challenges in Leicester. The council and NHS partners are determined to see improvements and to help residents lead healthier lives.

From my discussions with organisations and residents, I know there is a shared commitment in the city to improve health and to tackle health inequalities.

While the Government shies away from the bold decisions needed on public health, locally we will continue to set out ambitious plans to improve the health of our city.

This letter was first published in the Leicester Mercury, 25 July 2013. 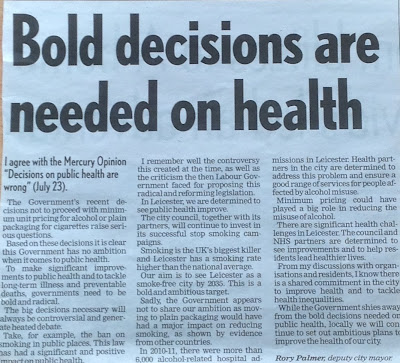 ONE WEEK TO GO 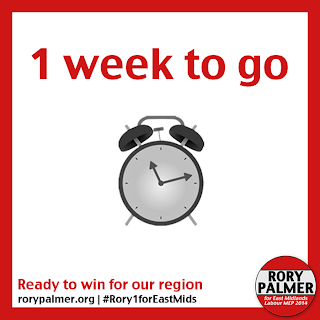 The MEP candidate selection ballot will close in one week (5pm, Wednesday 31 July).

There is still time to vote, so if you have not yet voted please consider supporting me with your first preference vote. You can find out more about me and my campaign on this site.

I am very grateful for the support I have received from across the region; from all counties; from all cities; from grassroots members, trade union activists, young members, councillors and Members of Parliament. I am proud to have the support of trade unions including Community, GMB and UNISON.

Thank you to everyone who has supported my campaign and who has voted for me.

If you have friends, family or colleagues in the Labour Party who have not yet voted please encourage them to support me with their first preference vote.

The finishing line is in sight but I am still campaigning for every vote.


Column for the Leicester Mercury following the Comprehensive Spending Review.

When George Osborne delivered his Comprehensive Spending Review statement a week ago we knew it would be bad news. With this Government, it usually is. Like councils across the country, Leicester City Council is now faced with a further round of painful budget cuts.

Back in 2010, the coalition made clear their intention to make significant cuts to council budgets. What has happened since is unprecedented. Local government has taken more than its fair share of cuts. This ideological attack on councils and the services is now coupled with the cost of the Government's economic failure.

The Government is now making further cuts to council budgets, and other public services, because they have failed to get the economy back on track and are having to borrow more. Because of George Osborne's economic failure, local councils will pay the price, with millions slashed from our budgets in 2015-16. Leicester City Council has already planned to deliver spending reductions in our annual budget of £85 million since 2011-12.

This has meant very difficult decisions and changes to services. Last week's spending review, with a further 10 per cent cut in our budgets, means a further £60 million reduction in the council's annual spending by 2017-18.

In the next few weeks, we will be setting out our initial plans for council spending in the coming years and how we intend to respond to this further round of cuts. These plans will be discussed with council staff, trade unions, our partner organisations and city residents. The pace and scale of these cuts is unprecedented. We are faced with questions we have not had to ask before. We will need to consider new and different ways of delivering some services.

These cuts are unfair. Councils in more affluent parts of the country are not being asked to make cuts as harsh as those we face in Leicester and in similar areas. Combined with the impact of the benefit changes and the rising costs of living, there are some very significant challenges ahead for the council and wider public sector.

We are determined to retain a good range of locally-delivered services, responding to the needs and expectations of residents. This will not be easy. These are the harshest cuts the council has ever faced. Unfortunately, the Chancellor's balance sheet does not account for how much local residents value and trust local services.

This column first appeared in the Leicester Mercury, 4 July 2013.

The finishing line is in sight.

It is now less than three weeks until the MEP candidate ballot closes. This has been a marathon of a selection ballot, with eight weeks of voting, hustings events across the region and thousands of members to contact.

With another busy week behind us I want to say thank you (again) to my brilliant campaign team. My team of volunteers have worked tirelessly for many weeks. I cannot thank them enough.

Since my last update blog we have had the East Midlands Labour Regional Conference. It was good to welcome the conference to Leicester, and to hear excellent speeches from Deputy Leader Harriet Harman, General Secretary Iain McNicol and many of our region's MPs.

The conference was well attended and it was good to catch up with friends and comrades from across the region. Labour in the East Midlands is in good shape and ready for the European and local elections in 2014 and the General Election in 2015.

It was good to attend a meeting of Lincoln CLP last week as well to discuss the European campaign. Thank you to the CLP for organising this discussion, it was interesting to hear the views and ideas of members in Lincoln. Important progress was made by Labour in Lincolnshire in May's County Council elections but UKIP also secured 16 seats.

I have spent a lot of time since May's elections listening to our activists and members across all parts of the East Midlands, and specifically on the issue of tackling UKIP. I will be setting out my thoughts in more detail on how Labour should tackle UKIP in the coming weeks

This week I joined Leicestershire CWU Branch Treasurer Andy Connelly to post a bundle of Save Our Royal Mail post cards to MPs. I am campaigning against the privatisation of Royal Mail.

Finally, a note on Ed Miliband's big speech this week. Ed is right to set out some bold party reforms. We cannot change politics for the better if we are not serious about changing and reforming the Labour Party. I have always supported the Labour Party - trade union link and will continue to do so.

Save Our Royal Mail

I am supporting the campaign to Save Our Royal Mail.

Privatising Royal Mail is the wrong thing to do. It will be bad news for consumers and businesses. When the Government relaxed the price controls for postage stamps the cost of a First Class stamp immediately rocketed to 60p. It is highly likely a privatised Royal Mail would see further dramatic price increases, the £1 stamp for sending a letter would be likely.

Find out more about the campaign and sign up your support at http://saveourroyalmail.org/

I will be working with the CWU and other organisations opposed to the privatisation of Royal Mail.
Royal Mail is a vital public service. Please join the campaign.