This visit came the day before 18 new apprenticeship opportunities at the City Council are advertised. These new opportunities will be in administration and customer services. Apprenticeships in IT and premises management at the Council will be advertised during February.

Levels of youth unemployment are too high. The Step-Up programme which we have launched in Leicester will see the City Council funding 160 six month work placements for young people with local employers. We have had a good level of interest from employers and the first set of vacancies under this scheme will become available in February. This scheme builds on the Labour Government's Future Jobs Fund.

It was excellent to meet with apprentices at STRIDE today and tour the facilities which Dave Brazier and his team have developed.


UPDATE
It was announced on 15 February that STRIDE had closed and ceased trading. This news is obviously devastating for the people employed there and the apprentices, including those I met when I visited. Since this announcement I have attending a meeting convened to bring together many organisations who want to help find alternative opportunities for the apprentices and young people who were on courses at STRIDE.

I have offered city council support, including funding, to help ensure the apprentices and young people are supported into new courses and opportunities. I understand that some of the former staff at STRIDE are working to set up a new company with the aim of continuing some of the apprenticeships and vocational courses and I hope this is successful.

With the HS2 announcement getting the headlines we must not forget about the importance of other rail investment priorities. Upgrading the Midland Mainline will deliver real benefits for the East Midlands.

HS2 will have real benefits, nationally and regionally, but these benefits are decades away.

For the East Midlands and parts of South Yorkshire the immediate rail investment priority is the full electrification and upgrading of the Midland Mainline.

The Midland Mainline is the slowest main route out of London and improving journey times between Sheffield, Chesterfield, Derby, Leicester and Nottingham to the capital will provide a real boost for the regional economy.

I have campaigned for the electrification and upgrading of the Midland Mainline for many years. Last year I led a delegation, including local MPs, to meet with the Railways Minister in Westminster to make the case. I have lobbied each Transport Secretary of the coalition government and alongside local government leaders from across the region met with Justine Greening in Loughborough.

"The Government plans say that faster trains will be on the Midland Mainline by the end of 2019 but we need it to be sooner than that. There will be benefits for the East Midlands from HS2 but those benefits are decades away. We need action now to boost the regional economy and bringing forward the Midland Mainline plans can help to do that."

I am determined that we tackle youth unemployment.

As Deputy City Mayor I have prioritised youth unemployment and have worked to develop new programmes in the city to get young people into jobs. The Labour government's Future Jobs Fund was an excellent scheme and was popular with employers and the young people who it got into work.

I have met young people who benefited from the Future Jobs Fund and others who are currently benefiting from work-based training, including city council apprentices. Earlier this week councillors heard from apprentices working for the city council's housing department. Last year, when I was responsible for transport at the city council, I introduced a new apprenticeship scheme for highways.

We have had a good response from employers interested in participating in Step-Up and offering new opportunities to young people looking for work, with financial support for the job from the city council.


I am looking forward to visiting Stride in Leicester next week. Stride operates as a social enterprise offering a wide range of training opportunities for young people.

It is crucial we avoid a lost generation and respond to the youth jobs crisis. Labour councils are working hard to do this, including in Derby and Nottingham. We need urgent action from the coalition government.

My article on youth unemployment for Labour Uncut can be read here.
A blog by Labour MEP Glenis Willmott on our visit to meet rail apprentices.

Yesterday the recommendations of the Leicester Child Poverty Commission were launched.

I chair the Leicester Child Poverty Commission, which I set up in June 2011. According to official figures there are over 26,000 children in Leicester living in poverty, with many more growing up in low income households. 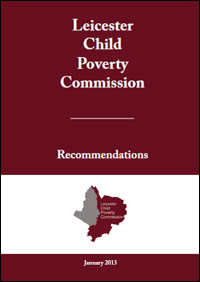 The report published yesterday sets out 66 recommendations, including:


I am grateful to the members of the Leicester Child Poverty Commission and all those who have contributed to our work. The important work starts now as we work with partners to implement our recommendations.

With child poverty predicted to increase this challenge is urgent.

The recommendations can be read and downloaded from the commission's webpages.

The Leicester Mercury reported on the publication of these recommendations, and the paper's editorial supported this work.