Exactly four weeks ago I was with my fellow East Midlands MEP candidates and Glenis Willmott at Braunstone Civic Centre for the Leicestershire hustings. This day also saw the start of the official voting period for the ballot to order Labour’s MEP candidates ahead of next year’s elections.

Members received an e-mail during the event informing them that the ballot had opened; I am told some members actually voted online there and then at the event. Over the next few days members across the region received their ballot papers in the post.

We are now midway through the ballot period, with another four weeks to go.

If you have not yet voted I hope you will consider supporting me with your first preference vote. You can find out more about me, my experience and my ideas for our region in Europe on this site.

I have the experience and ideas to be an effective MEP for our region. The East Midlands faces some big challenges including the need to secure investment to create new jobs. Youth unemployment is a significant challenge and I have made this a specific priority in my campaign.

I know what is needed to win a better deal in Europe for all parts of our region; our rural villages, coalfield communities, market towns and the cities.

Thank you to everyone who has already voted for me, I am very grateful for your support.
I am also really grateful to the trade unions supporting me; GMB, Community and UNISON. 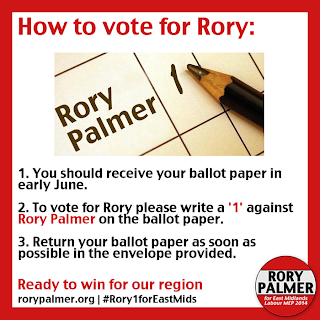 I also want to thank my fantastic campaign team who continue to work tirelessly. I set out on this campaign with the aim of engaging members across the region in the European election campaign. I have been determined that my selection campaign would do that and I am grateful for all the work my team have put in so far to help make that happen.

This last week has been another busy one. It was good to see the People United bus arrive in Leicester city centre on Wednesday. This week I have also supported the campaign to save Royal Mail.

Last weekend I was in Birmingham at Labour’s National Policy Forum. This was an important weekend in Labour’s policy-making process and along with the team of East Midlands reps, I helped to make sure views of members in the region were put forward. I attended policy discussions on health and social care, children’s service and early years, international development and foreign policy.

I also took part in a panel discussion to discuss best practice in engaging members in the Your Britain policy process. I mentioned lots of examples of good policy discussions that have taken place across the East Midlands including events I attended in Erewash and Loughborough.

The most enjoyable aspect of this selection campaign is hearing the thoughts and ideas of members across the region about next year’s European elections.

I have said throughout the campaign that we need to listen to our members. The European elections are now less than a year away. Please keep putting forward your ideas and suggestions for the campaign. Your ideas can help us win next year. 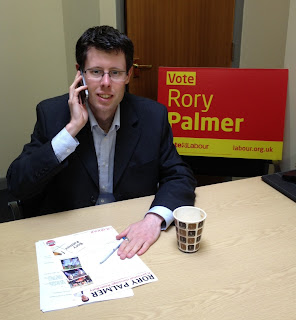 
It has been another busy week on the campaign. Party members across the region are still voting and I want to thank everyone who has supported me in the ballot, and thank you again to my hard-working campaign team for all their efforts, enthusiasm and support.

Last week I attended a discussion on the European campaign organised by St Anns Branch in Nottingham East and a hustings event at Erewash CLP. It was also good to be at the AGM of Leicester South CLP.

On Friday I spoke about my campaign at the AGM of Retford Branch in Bassetlaw. On Saturday I was at a meeting with Glenis Willmott MEP, fellow candidates and representatives from CLPs across the region to discuss our campaign strategy for next year's elections. It was interesting to hear campaign ideas from across the region.

Yesterday evening I was at South Leicestershire CLP with my good friend Willy Bach discussing how we build a positive future for young people. I have made youth unemployment the top issue in my MEP campaign and we need to see more investment for apprenticeships, training programmes and skills development. I have supported the European Youth Guarantee for jobs and spoke at the European Socialists Conference held in Nottingham last November.

LGBT Labour have sent a questionnaire to all MEP candidates and my response can be read here. I have always supported equality for LGBT people and will do so as an MEP.

This week UNISON are holding their annual conference, I am proud to have the UNISON's endorsement and support in the MEP candidate ballot.

Again, thank you to everyone who has supported me in the ballot. If you have not voted yet please consider supporting me with your first preference vote.


Below is an excerpt from my latest campaign e-mail sent to Labour Party members in the East Midlands.

I want to see a campaign and policy agenda built and driven by our members.

If you have a suggestion or idea please get in touch here.

You can take part in Labour's policy process via Your Britain.

From my latest campaign e-mail to Labour members in the East Midlands:

It has been enjoyable and interesting to speak with hundreds of members across the region. The hustings events that have been organised have been good opportunities to answer questions, share ideas and talk about how get more Labour MEPs elected in our region.

Thank you to everyone who attended the hustings and to those local parties that have organised their own events for the MEP candidates.

We have discussed many important issues at these events, including; our membership of the EU; youth unemployment; tackling UKIP; immigration; employment rights; climate change; energy policy; fighting crime; jobs and growth; transport; equality campaigns and many more. You can find out my views on these issues and my policy priorities at www.rorypalmer.org

At all the hustings events and throughout this campaign I have been clear: our members are Labour's greatest strength and we need your ideas to help us win next year.

That's why I want members across the region to have a real say on our policy and campaign plans ahead of next year's elections. I will work to make that happen; by attending local party meetings and by organising policy forum discussions.

Many members are already e-mailing in their policy ideas, questions and suggestions - I am responding as quickly as I can!

Please continue to put forward your ideas and policy suggestions. I will always listen to what our members say: the European campaign must respond to the issues and concerns in communities across our region.

Please make sure you have your say; by voting in the MEP candidate ballot and by putting forward your ideas for the campaign.

If you have already voted for me, thank you for your support.

It has been a couple of weeks or so since my last campaign update blog.

Members across the region are now voting to order Labour's MEP candidates ahead of next year's European elections. Members can vote online or by returning their ballot paper by post. 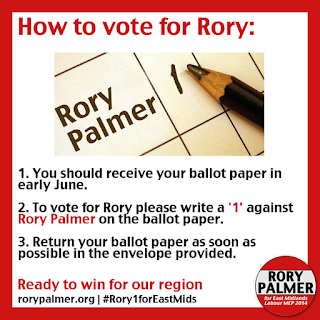 I want to thank members who have already voted for me and given me their support, I am very grateful.

However, there is a long way to go. Please encourage your family, friends and colleagues to support me by voting for me as their first preference.

The hustings events organised by the East Midlands Labour Party have now concluded. Thank you to all those members who attended these events and asked questions. We had hustings events in Lincoln; Nottingham; Derby; Braunstone, Leicestershire; and Corby. There was also a hustings event held in Boslover as part of the Regional Local Government Day. Thank you also to our MEP Glenis Willmott who chaired all of these hustings events.

It has also been good to get lots of e-mails from members in the region asking a wide range of policy questions. I am doing my best to respond to e-mails as quickly as possible.

Since my last update blog, I have also attended the Knighton branch meeting in Leicester to discuss the European campaign; joined the celebration event following Vijay Riyait's city council by-election victory; and spoke about European campaign at the Leicestershire & Northamptonshire Co-op Party Weekend School in Corby.

Finally, I would like to say a big thank you to my excellent campaign team across the region. My campaign has been a real team effort and I appreciate everything that my friends, family and supporters have done so far. My sister even baked campaign cakes (see below) to rival Sarah Russell's chocolate 'squidgy' cake, which over the years has become a mainstay of Labour campaigns in Leicester!

If you can help in the next few weeks please get in touch here.

I am very pleased and grateful to have the support of UNISON.

'UNISON recognise the importance of having strong Labour candidates who can help further the fight for employment rights and be a strong voice for the citizens of the East Midlands in Europe. Rory would be a hard working and dedicated MEP who would work tirelessly for the good of UNISON members across the East Midlands.'

'Rory has and continues to show his commitment to public services and UNISON knows this would continue as a Labour MEP.'

'UNISON recommends its members to mark Rory Palmer as their first choice candidate.' 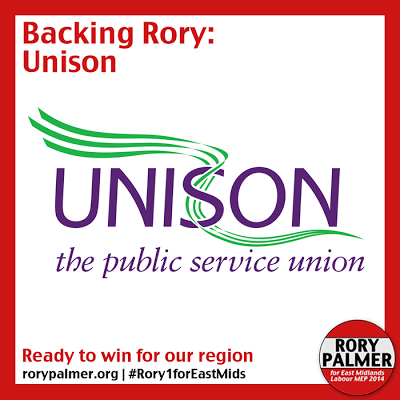