Youth unemployment: my top priority for the East Midlands

Since it was announced that I would be a Labour candidate for next year's European Parliament elections people have asked me why I want to represent the region and what my priorities are.

My top priority for the region is youth unemployment. 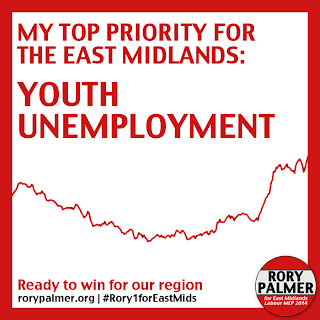 The latest figures will be published this week and I fear we will see youth unemployment going up again. We cannot afford a lost generation and we need urgent action at local level, national level and in Europe.

I grew up in this region and have seen the impact of industrial decline. I have seen the impact on communities when good, decent jobs in industry and manufacturing disappear. As well as the youth jobs crisis we have to deal with the problem of under-employment and the low wage economy. We need to see employers paying the Living Wage and we have to deal urgently with the scandal of zero hours contracts.

We need to see government's invest in programmes like Labour's Future Jobs Fund that got young people back into work.

As Deputy City Mayor in Leicester I have led the development of our Leicester to Work programme which has created new apprenticeships at the council and has introduced a new programme of paid work six month placements for young people out of work. For more information on Leicester to Work see here.

Last October I wrote for Labour Uncut on the need for urgent responses to the youth jobs crisis. I called on the British government to take action:

We know that this government is dangerously stubborn in its refusal to admit their plan is failing. When it comes to youth joblessness, political failure matters less than the economic and social consequences. When it comes to the risk of a lost generation it is the very real human cost that should motivate all politicians, whether in town halls, Whitehall or Brussels.

I am making youth unemployment the top issue in my campaign. We need a European Youth Guarantee and we need regional approaches to this, something more difficult to secure after the government abolished Regional Development Agencies. As an MEP I will work with local authorities, employers, unions, Local Enterprise Partnerships and training organisations to get real help from Europe, including funding, to get young people in the region back to work.

I want to see the youth jobs crisis and our determination to give young people hope and a better future central to Labour's campaign for next year's European Parliament elections.